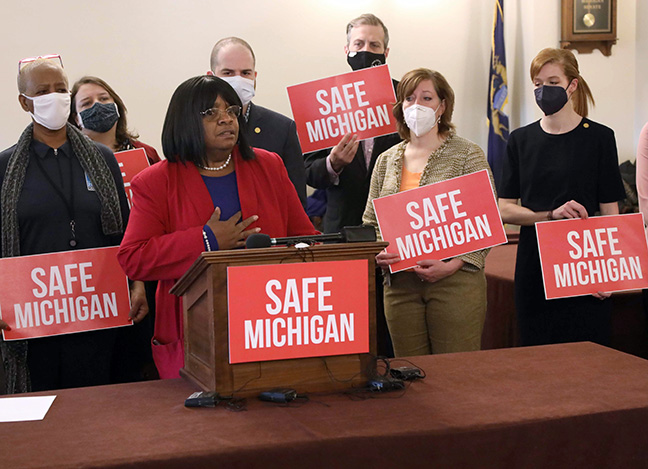 State Rep. Brenda Carter is serving her second term representing the 29th House District, which encompasses the cities of Auburn Hills, Keego Harbor, Orchard Lake Village, Pontiac, and Sylvan Lake. Carter is the fifth of 13 children. Her parents were John H. Canty and Mary S. Wallace. She graduated from high school in Detroit and attended Michigan State University, Spring Arbor College, and Oakland University. Carter holds a Bachelor’s degree in Business Administration with a concentration in organizational design as well as a Master’s degree in Public Administration with a concentration in local government. She is a graduate fellow of the Michigan Political Leadership Program and a certified grant writer and fiscal consultant.

Carter joined the Improved Benevolent Protective Order of Elks in 1975, where she held various local and state positions, including state director of education and national areas, grand trustee, grand auditor, and Grand Directress of Public Relations. Carter is one of the founding members of the Million Woman March. Her involvement with the Million Woman March and the Elks spurred her on a speaking tour around the globe. Carter traveled around the U.S. She also went to northeastern Africa, Israel, Egypt, and extensively in the Caribbean before returning to the United States. It was at one such speaking engagement that she opened for then-Senator, Barack Obama.

When Carter moved to Pontiac, she immediately began working in her community, starting with the Pontiac Community School Improvement team. Later she assisted with the programming of the Pontiac Northern’s Huskie Brigade Robotics Team the year the team won for the F.I.R.S.T International Championship.

Carter is currently a member of several organizations, including the Council of Urban Boards of Education, National School Board Association, Oakland County School Board Association, Delta Sigma Theta Sorority, Inc., and New Mount Moriah International Church. She is also on the board of directors or the executive committees of several organizations, including the Tax Increment Finance Authority, Brownfield Redevelopment Authority, Delta Fortitude Foundation, Michigan-Shiga Sister State Board of Directors, Women Officials Network and the former president of district four’s Citizens District Council.

Carter is the first woman to hold the seat of State Representative for District 29. She founded five district task force groups that focus on the areas of education, veteran’s services, poverty and homelessness, minority maternal health, and criminal justice reform. She is the co-chair and co-founder of poverty and homelessness caucus, which is bi-partisan and bi-cameral.

Carter and her husband, Randy, live in Pontiac, Michigan. She has six children and five grandchildren.