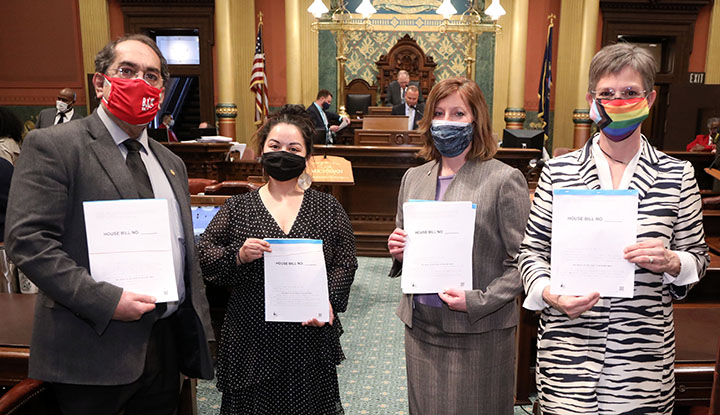 “For the thousands of children in our state foster care system, the importance and hope of a permanent, loving home cannot be overstated,” said Cavanagh. “Rather than limit the number of Michigan’s willing adoptive parents, we must be doing everything in our power to encourage a landscape for our state that recognizes the many different ways it means to be a family in the 21st century.”

The introduction of this legislation follows the announcement of Bethany Christian Services, a religious foster care and adoption agency with locations in numerous states, which will expand its current Michigan policies to now allow LGBTQ parents to adopt children nationwide. Bethany Christian Services previously received criticism due to their adoption practices that discriminated against LGBTQ parents, despite being funded in-part by taxpayer dollars.

“All over our state, there are children desperately waiting to be placed in a loving home,” said Sneller. “These bills will ensure that every person in our state that is ready to provide support and stability to a child will be able to do so, and I’m proud to have joined with my colleagues on this important legislation.”

“Michigan took a major step backward when these discriminatory laws were passed in 2015 under the false pretense of religious freedom,” said Rogers. “It’s unconscionable that we still have these laws on the books. Families and individuals who are willing and able to provide a loving and supportive home to a child should be able to do so without unjust discrimination. This legislation will help ensure that we hold these agencies accountable and affirm our commitment to making our state welcoming for everyone seeking to raise a family in our state.”

In addition, the package would authorize second-parent adoption in Michigan, allowing a same-sex parent to adopt their partner’s biological or adoptive child regardless of whether the relationship is legally recognized.

“Second-parent adoption is long-overdue for so many Michigan families, especially when you look at the legal hurdles many parents face when it comes to having a say in their child’s medical care, academic and educational needs, and so much more,” said Brixie. “Helping parents overcome these unnecessary obstacles is incredibly important to foster greater equity in Michigan’s adoption practices, regardless of the many different shapes and sizes families come in. A good parent is a good parent, no matter their sexual orientation or gender identity. Our laws must recognize that.”