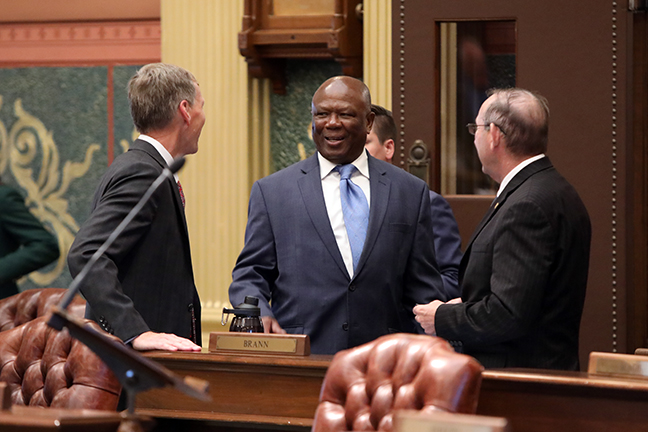 State Representative Ronnie Peterson is serving his third term in the House of Representatives representing the 54th House District, encompassing the city of Ypsilanti, Ypsilanti Township and Superior Township. Rep. Peterson sits on the Committee on Appropriations; Appropriation Subcommittee of Military, Veterans and State Police; and is the Democratic Vice Chair of the Appropriations Subcommittees on LARA and DIFS, and Transportation.

As a civic and community leader, Rep. Peterson is deeply committed and has been engaged in public service for nearly 40 years. He served his community as an elected member of the Washtenaw County Board of Commissioners. As a county commissioner, Rep. Peterson served as chair of the Ways and Means Committee and sat on the Retirement Pension and Money Purchase Boards. Before countywide service, he was a member of the Ypsilanti City Council for two terms.

Beyond his official duties, Rep. Peterson also served on the boards of numerous associations and charitable organizations. Previously, he was President of the Ypsilanti Breakfast Optimist Club, and Vice President and Treasurer of the Ypsilanti Area Jaycees. As a volunteer, he supported and served on the boards of the Washtenaw County United Way, Advisory Council for Foster Grandparents Program, the Policy Council for Washtenaw Head Start, the Corner Health Center, the Full Circle Community Center and the Washtenaw County Council for Children.

Whether a Washtenaw County commissioner, Ypsilanti City Council member or citizen, Rep. Peterson has played a leading role with others in establishing the following initiatives and resources in Ypsilanti:

As a Michigan State Representative, Ronnie Peterson has assisted in the development of several future economic opportunities for the Ypsilanti region: