State Rep. Rheingans Co-Sponsors Repeal of Right-to-Work as Her First Bill on Opening Day of the 102nd Legislature

State Rep. Rheingans Co-Sponsors Repeal of Right-to-Work as Her First Bill on Opening Day of the 102nd Legislature

LANSING, Mich., Jan. 11, 2023 — State Rep. Carrie Rheingans (D-Ann Arbor) was sworn in today as a member of the 102nd Legislature and immediately co-sponsored her first bill repealing the so-called “right-to-work” law. Rep. Rheingans signed on to co-sponsor all six of the first bills introduced in the 102nd Legislature, which highlighted shared priorities across the Democratic caucuses to put Michigan families first. The bills include the repeal of the unfair and unpopular “retirement tax”; an increase of the working families tax credit to help residents to keep more of their hard-earned dollars; the expansion of the Elliott-Larsen Civil Rights Act to include LGBTQ protections; restoration of the state’s prevailing wage law; the restoration of workers’ rights by repeal of the so-called “right-to-work” policy; and legislation to repeal the state’s 1931 statute criminalizing abortion.

“It is a dream come true to be able to serve the people of Ann Arbor, southeast Jackson and western Washtenaw counties in the state House,” Rheingans said. “I’m excited we elected our state’s first Black speaker of the House today and that we’re serving in the majority. We finally get to work on the issues that Michiganders have been wanting the Legislature to address for years.

“As a proud union member, I am also honored to have my first co-sponsored bill be the repeal of the so-called right-to-work law. Our state’s middle class was built by unions, and the regressive right-to-work law prioritized corporate interests over workers’ well-being. This step is necessary to ensure that workers have stronger protections and a louder voice to demand higher wages and better benefits.

“I am also proud to co-sponsor the repeal of the pension tax and the restoration of the prevailing wage and Earned Income Tax Credit. Democrats are putting working families at the forefront of our new agenda.”

As a staunch advocate for fundamental human rights, Rheingans also signed on to co-sponsor the bills that repeal the 1931 abortion ban and amend the Elliott-Larsen Civil Rights Act to explicitly include protections for sexual orientation and gender identity and expression.

“I’ve been calling to amend the ELCRA for years, and I’m honored to be part of the Democratic majority that will get the job done.”

Rheingans was delighted to have her husband, daughter, step-father, step-sister and office staff in attendance as she was sworn in for her two-year term. 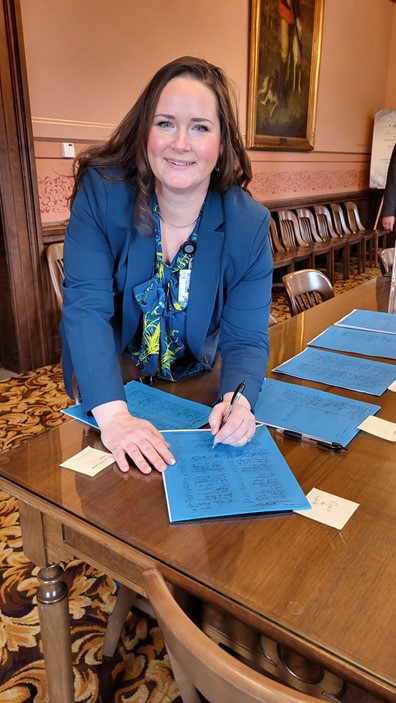 Rheingans signs on to co-sponsor the repeal of the so-called right-to-work law. 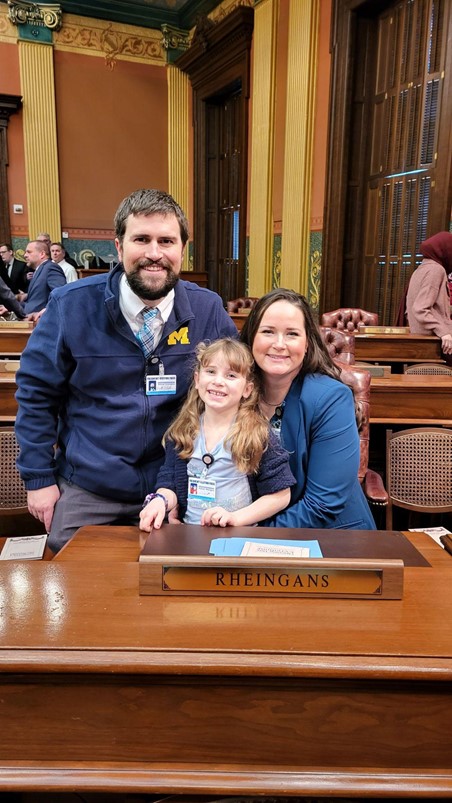 Rheingans with her husband and daughter on the House floor.