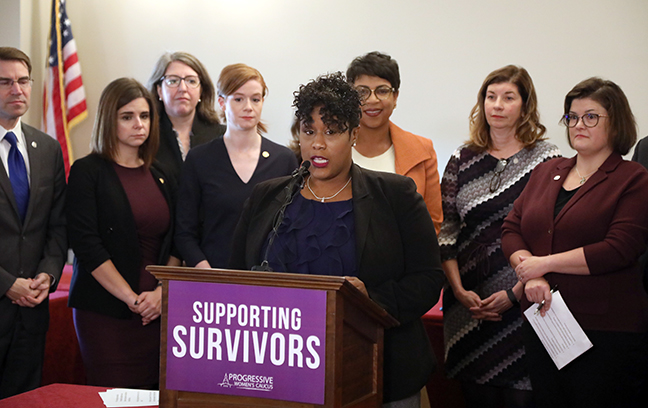 State Rep. Tenisha Yancey is serving her second full term representing the 1st House District, which is comprised of the cities of Grosse Pointe Woods, Harper Woods, and parts of the Village of Grosse Pointe Shores and Detroit. Previously, Yancey served on the Michigan Competitiveness, Tax Policy and Transportation and Infrastructure Committees.

Yancey was born and raised on the east side of Detroit, the youngest of three children. Her mother worked in the General Motors plant in Poletown, and her father was a bus driver for the Detroit Department of Transportation. At a young age, Yancey became the caretaker for her mother, who had suffered two strokes, after her father was killed in an accident caused by a drunk driver.

Yancey graduated with a Bachelor of Applied Science Degree from Eastern Michigan University. While working full time for Wayne County, she attended law school and graduated, receiving her law degree from the University of Detroit Mercy School of Law in 2013. Yancey worked as a project manager for the Wayne County Land Bank and as a government relations executive and community outreach program coordinator in the Wayne County Executive’s Office. She then transferred to the Wayne County Prosecutor’s Office, where she worked as an assistant prosecuting attorney in the Juvenile Division. In June 2016, she was appointed to the Harper Woods Board of Education and later elected to that position.

Yancey is a member of Delta Sigma Theta Sorority, Inc. She is an active member of her community, speaking at school career fairs, churches and community meetings. Yancey is the mother of one son and lives in Harper Woods.